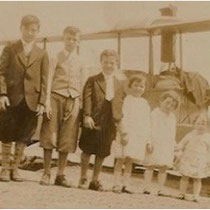 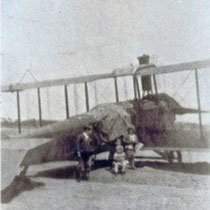 The airplane is the photograph made an emergency landing on the George Reisert farm which was part of the 169 acre parcel owned by the Reisert family, located on the south side of Sunrise Highway in Valley Stream, and sold later that year to Curtiss-Wright to be developed into an airfield. Today, it is the Green Acres Shopping Center.

(George Jr.(b. 1918), was born prematurely and he could not cry, and would only moan. The only incubator was at Coney Island, and his mother, Anna Haligan-Reisert, would not have it. Doctor Foster signed the death certificate. Then arrives Grandmother, Anna Richter-Reisert, whose response was, ”Nonsense. Feed the child!”)

It was not difficult to imagine the awe this event, the emergency landing how inspired in the children who lived a mile from the nearest neighbor, (who would be a relative). Mama made our clothes and sewed comforters made with down from the ducks which lived on the brook. We slept with one over one under us on the cold winter nights.

There was a hand-powered pump in the kitchen to draw water, and a coal stove. Mama, would leave oatmeal cooking overnight, to be hot and ready in the morning. The farm was irrigated with a system of ditches, drawing water from the brook. Produce was hauled with a horse and wagon to the Wallabout or Canarsie markets in New York City.

I have always felt it was this “miraculous” event, the “emergency landing” is what inspired Jacob (3rd from the left) to a life of aviation. Growing up, he was always making model airplanes. He went on to study aeronautical engineering at Rensselaer Polytechnic Institute. With WW II approaching, he took flying lessons at Zahn’s Airfield in Amityville. and enlisted in the Navy Air Corp., earning his pilot wings. Flying a Grumman Torpedo Bomber fighter- 3 - Avenger from the aircraft carrier U.S.S. Belleauwood to Ishigaki Harbor, Japan on March 1, 1945, he was wounded with anti aircraft fire as he scored hits on a Japanese destroyer. He flew the nearly bomber when open-bay doors and ruptured gas tanks for more than two hours to reach a rescue submarine, assuring all that he was fine. He ordered his crew men to jump, one at a time.

Only his lifeless body was pulled from the water was discovered that his left hip had been shot away, and his right calf penetrated with shrapnel. He was awarded the Navy Cross posthumously. For fifty years the Belleauwood group petitioned for a congressional medal; to no avail.

The George Reisert family relocated to an 18-acre site on Wheeler Ave. in North Valley Stream. Graduating from Valley Central High School, George Jr. and Fred continued to work the fields, spending winters at the Cornell University, learning crop rotation and methods on improving crop yield. The parcel never was so productive as the Green Acre farm. When Green Acres was paved over some years later, I remember my father wept. “They’re paving over some of the best farm land in the country.” he said.

Increased competition from distant areas, the result of improved transportation, and increasing taxes from the rising population created as unsustainable environment for farming. I remember Fred returning home from market with a load of spinach, which he dumped. The best offer he had was less than the cost of the crates it was packed in. The Wheeler Ave. farm was sold in 1948 to developers.