Golden Jubilee of our Congregation - 50th

Which wanderer does not ever feel the need, at certain points, to stand still for his life's journey and to look back on the path behind him, and then, refreshed and strengthened with new courage, seize the pilgrim's staff for the onward journey? Such a breakpoint is for our German Evangelical St. Paul's Church is the year 1914. Fifty years of richly blessed parish life are behind us and remind us today to the grateful remembrance "Praise the Lord my soul and do not forget what He (during this half-century) Has done good ".

As everything in the kingdom of God ordinarily takes a small, unsightly beginning, so too does the foundation of our church. Grown from small beginnings, it has become a blessing, comfort and peace for many.

The beginning of this Church was several years ahead of the laying of the cornerstone. In February 1860, the trustees arrived at a piece of land (100 x 200 feet) which Mr. Johann Seufert donated for a dollar. In previous years, services were held in the homes of devout people, and as the number of believers grew, services were held in various locales on Merrick Road and Foster's Meadow Road.

These meetings were led by preachers from East New York, Brooklyn and East Williamsburg. The number of believers had grown so much that in 1863 there was a need to build a house of God. A request by Mary Ann and John Seufert for a larger piece of land, namely two fields for $200.00, was the deciding factor on where to build. The land was bought on January 22, 1864 and soon after the construction of the church was undertaken. The powerful stones in the foundations of the original old church, were rebuilt into the foundations of the new church, are a silent testimony to the hard work of those faithful men who brought them from the north side of the island.

On 28 March 1864 the cornerstone was laid and on 26 December of the same year the church was dedicated. The church was organized as "The German Evangelical Lutheran Church of Foster's Meadow" and counted 40 members. The next year, the community joined the presbytery of Nassau and received strong support from the presbytery for many years. Pastors P. D. Oakey, J. J. Morgan and J. Neander took up the members and appointed elders to their office on 15 November 1865.

It is easy to imagine that this transition from the Lutheran confession to the Presbyterian confession was not easy. The experiences of that time speak loud. To take a closer look at this period of time is of no use, unless we learn; Disagreement and conflict in a church is to their harm and is not from God. It is to be regretted that many interesting papers of value of the origin of the congregation have been lost through the dispute.

The part of the congregation that joined the presbytery took steps to change its name by law. The legally changed name of the church is "The German Evangelical St. Paul's Church of Foster's Meadow." The name of the church has been under this name since 13 February 1867. The names of the gentlemen: Paul Wich, Konrad Scholl and Daniel Vogel are cited here, as these men are no trouble at all; Worked out of sight and devoted time and energy to the church during this difficult time.

Pastor Ochse was Among the first preachers of whom there were many, Ochse was a local pastor because he founded a German Lutheran congregation in Jamaica, where he stayed only a short time, as the congregation joined the Reformed church.

In 1870 E. T. A. Schmoll became pastor of the parish. He is a serious man of God and a faithful worker. Under his leadership, the affairs of the church were in order and he rose in prestige in front of the people. He was able to set up new registers for all official acts, since the earlier ones had disappeared; and therefore, the registers of the congregation and only go back to the year 1870.

Under his leadership, the congregation was able to build a rectory that served many years of service. The cemetery next to the church was enlarged and laid out, as well as a German everyday school started. He was greatly blessed so that the church and the sect of God increased, but his service did last long, since he died in the spring of 1876 after a short suffering. His mortal remains were solemnly and deeply mourned and buried in the cemetery next to the church.

For almost two years, the young community was without a pastor and was partially served by students studying at the Bloomfield Seminary.

In the spring of 1878 A. E. Wanderer became Pastor. He was not only popular in the congregation, but everyone in the village, even the Catholic priest was his personal friend. He shared with the members their joy and sorrow, He was their friend and brother. His sociable nature was very good for him, by virtue of which he had many conversations, great picnics, and his work spread and increased.

Already at that time the church had made the attempt to perform evening services, which were soon discontinued. A lively women's club was founded on April 19, 1883, which has always been a blessing to the congregation.

Pastor A. E. Wanderer was a great friend of nature. His garden was always the most beautiful in the area. He knew all the short paths through woods and across the fields, his favorite horses were "shoemakers"; Under him, the congregation became debt-free and self-sufficient. In the autumn of 1888 he followed a call to the First German Presbyterian Church in Paterson, N.J.

Pastor J. P. H. Schweitzer entered the work fresh from the seminary at the end of 1888. He continued the blessings of his predecessor and the congregation enjoyed a healthy growth. The mission to New Hyde Park was started by him. Also, there was a strong desire to build a new church. Committees were appointed to raise funds, but it remained difficult to collect. At the end of 1894, he was welcomed with a call to the Corinthian Avenue Church in Philadelphia, Pa.

Pastor R. J. Buttinghausen started his work at the end of 1894. He worked faithfully and at his best, but the many small communities that were established not far away from the church made the rural congregation work twice as hard. Also at this time a number of the faithful old members died. A church choir and youth club were founded, but both soon ended A pipe organ was bought, a new horse shed built as the old one burned down, and the pretty little church that was built at New Hyde Park, are the monuments of the Pastor’s dedication. Following a call to the Park Avenue Presbyterian Church of Bloomfield, N.J., he resigned from office in April 1903.

Around 6 September 1905, a mission sewing club was launched with 24 members. The donations for the mission quadrupled from the past years. A mission to Rosedale began in 1909, but after two years the English church was transferred to Springfield.

We confess and say the Lord has done great things in this church.

The church register, as before, dates back only to the year 1870 and shows that at this time preachers of the church,
1322 people were baptized,
529 persons were confirmed,
341 couples were married,
713 people were buried,
372 people joined the community.

Four sons of the congregation entered the ministry preaching reconciliation:

The last named, Albert Jagnow, has been pleased by God to move from the struggling to the triumphant church; the other person stands in the vineyard of the Lord as a faithful worker.

Indeed, the blessing of God has accompanied the church from the beginning and blessed it to bring blessings for ever and ever.

Praise and thanks for everything to God the Father of our Savior Jesus Christ. 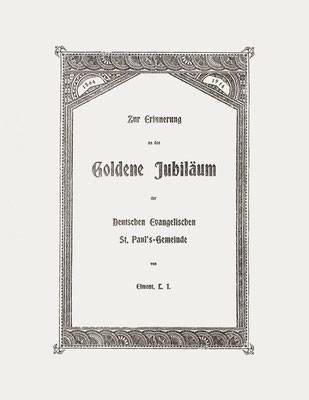 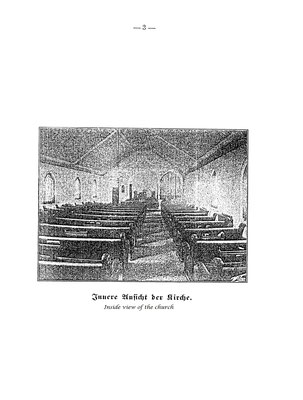 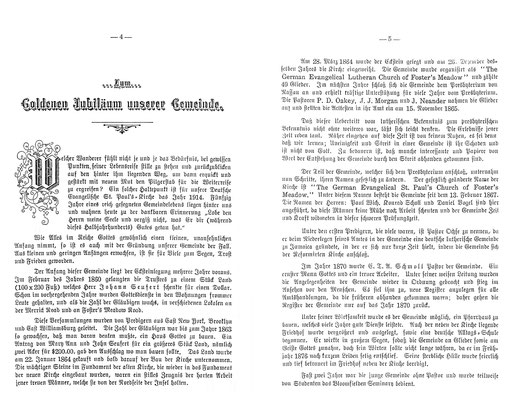 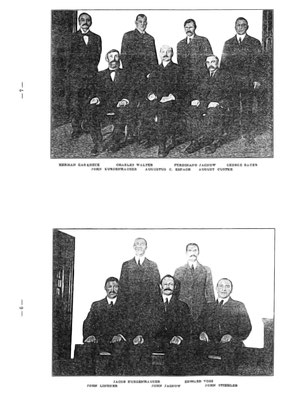 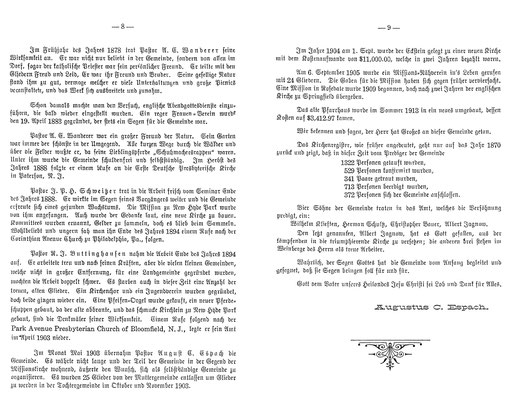 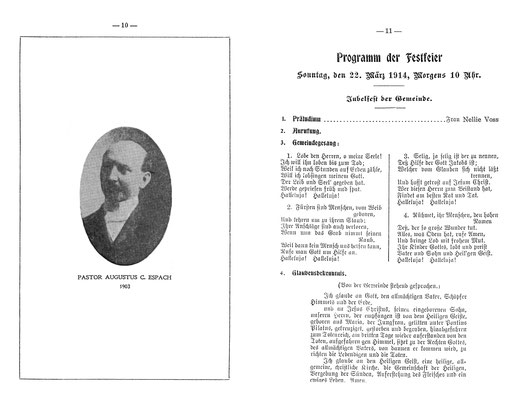 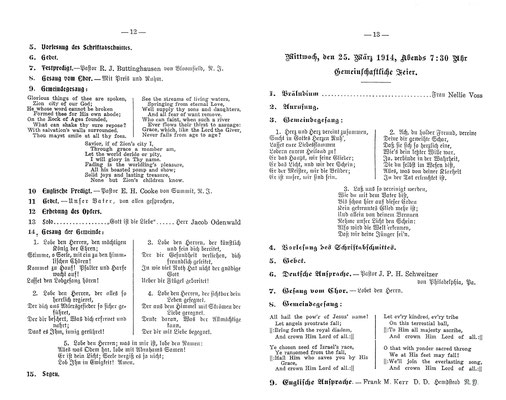 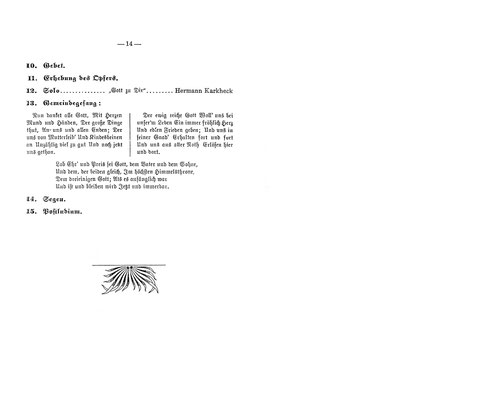